Looking through old photo albums, when they were actually processed and printed on 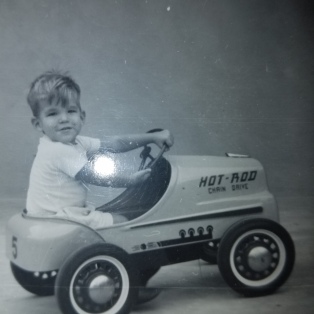 paper,  I spent part of Saturday rewinding about 90 years of my family’s history through some dusty albums that were in my garage storage bins for several years.

Old photos encourage me.  Even seeing my father looking so athletic and proud with his young son dispels memories  of the many years he was crippled by illness.  My dad was a brilliant, funny and an athletic man.  I spent many years of my youth thinking of many negatives: when dad read something in the Wall Street Journal that said that glow-in-the-dark balls were unsafe, I was marched back to the toy store to get my change back.  When we went on road trips I was drilled on my multiplication tables.  Later when my mom and he were divorced,  and dad took me out on his weekend visit, we would go to nice restaurants,  but he always ordered the cheap meals and we filled up on the free rolls and butter.

Only later as an adult, I remembered that he would drive across the country from his job to attend my middle school and high school graduations.   He took a teaching job near our home so he could spend time with me.  At that time he was still trying to get half his body to respond after a stroke – and dealing with people who would equate debilitation with stupidity.   Far from it  – even in that condition.  He graduated near the top of his class in high school and in college as an aerospace engineer but also played sports.   He probably was motivated to excel as my grandfather’s occupations seemed to change as jobs came and went.   Instead, he worked in missile propulsion and development in the early years.  (Which likely helped me to get the jobs I held that involved trust.)  My father died 28 years ago while I was in the service.  I did not find out for two years.

My mother was a good-looking woman;  as sharp mentally as attractive outwardly.  And it must have been quite the catch for my father.   When my maternal grandparents emigrated from Ireland at the end of WWII, she had to contend with Seniors in high school making fun of her accent.  In New Jersey they did not have much else to poke fun at.   She had graduated at the top of her nursing class at Mount Sinai Hospital, and as an R.N. worked with infants, intensive care, emergency treatment, and supervision.  Looking back at my teen years, it no longer seems odd that she pursued a dream to become an english literature scholar and college teacher in middle age.  She became a nurse for the career opportunity that would always be useful and financially secure.  But her passion was elsewhere.

Mom’s aged photos showed several beaus – a soldier who looks like he only just lost out to my dad;  and some guys who might have been doctors, attorneys or business people.   Among her circle of friends included a Nobel laureate.  But the family photos bear witness to the changes that time, health, and fortunes – waxing and waning produced.

After deciding to marry again, she later learned that her second husband was attracted to children.  That divorce sealed her future as a bitter woman, more inclined to spend her savings on old horses, rescue dogs, cats and a burro.   You see, I have a sister, an adoptee, whom I have rarely spoken with in forty years.  Robin never forgave her mother for divorcing my father and subjecting her to abuse.   We went separate ways after I initially joined the Navy – and she was the one who suffered at the hands of my mother’s second husband.  After thirty years, we last spent any time together in the few months after my mother’s passing six years ago.

I chose to go into the Navy as much for the adventure,  the training – which has become the means I earn a living,  and for several veterans’ benefits, as I did to make a clean break from the family.   That’s actually the ironic part,  as I returned after my first enlistment to the same city, Tucson,  to attend the University of Arizona.  My father, still living at the time, moved to Tucson, and I spent time with him and with my mother – still my most ardent cheerleaders for my success.

I can only speak for myself, but I realized around the age of 39, that all of life’s successes mean less than how you handle failure.  Raised with a concept of the spiritual, but never seeing God,  I was continually trying not to be the sum of my upbringing and family.   But after twenty years of a changed life,  I recognize suffering allowed me to treasure the family I have now.   I realize that there is a God that cares for us, but does not force us to engage with him;  most of the world is suffering at the hands of people. For the goodness and love to have any impact, overcoming self-centered attitudes,  misgivings about our childhood,  misgivings about our marriages or children or jobs or finances or health have to be overcome.  Some people blame God for being on the sidelines. Others have no room for God.  Still others have god in their schedules but not in their driver’s seat.

And that is why I can look at these photo albums of people and places that shaped my life with contentment.  I appreciate family history but I am not bound by the people my parents became nor am I limited by my own shortcomings. I trust in my heavenly Father and Lord.   And the future does not hold any fear for me.

One thought on “Remembering where I came from”