I’ve had many occasions, at work, driving cross-country, at various public events to meet people who are veterans or on Active Duty with one or another branch of the military.  Driving around San Diego, I am saddened by the number of homeless on the streets.   As a veteran, I know that there is a substantial percentage of these men and women – or imply through the hand-lettered signs that they are down-on-their-luck veterans.   Many unfortunately are, but may also be in an untenable position due to alcohol or drug-addiction.   Yet I admit, I am more drawn into conversations  when encountering squids, jarheads, ground pounders or zoomies working in shops, service industries, Costco,  or government offices   mutually recognizing a military connection.   And whether it is initiated by a ballcap, t-shirt or window sticker, we can converse about shared life experience.

There is something instantly bonding about men ( and women) who share the common experience of military service.   Yesterday, I was enjoying a little rest on my homeward commute at my little bastion of like-minded libertarians, and got interested in a conversation one of the guys was having about an exchange with a cop.  Turned out this cop was practiced – but not in a good way – of embellishing some prior Navy experience.  As it happened, my acquaintance, like most of those who have had some years in the military was correcting this cop’s recounting of his service by providing some firsthand expertise in the details (occupation codes known as NECs or MOS in other services, training specifics, locations) that this storyteller had fudged– as would have I in the same exchange.

There is nothing more disingenuous than a person misrepresenting military service.  “Stolen Valor” is the term many may be familiar.  Most of the perpetrators are playing on the sympathies of the public, trying to obtain benefits not owed, or wooing the gullible.   While there have been several court cases deciding that ’embellishment for the purposes of misleading public opinion’ – politicians, editors, bureaucrats, teachers have not been worthy of punishment,  there have been equally social media shaming of these con artists who were bringing discredit to those who serve or served honorably.

Yet it was the exchange of sea stories with my shipmate which brought back great memories for us both.  Both of us entered the Navy a year apart in the 1970s.   He was a fellow technician, working with computer systems aboard ship before the Navy combined the ratings,  Many times, the Navy consolidated skills that had their own individual occupations with others,  as was the case with my own rating after my retirement.   Regardless of the fool trying to boast about details of service that other “salty” Sailors – ones with years of sea duty and military experience – could immediately call his bluff,  my conversation yesterday was refreshing in bringing the memories back to the surface.

In those days, there were traditions and customs, regulations and deckplate leadership.  When some Sailors who were otherwise experts in their trade, had a little too much to drink on the prior night’s liberty, their shipmate including the supervisor would look ot for them.  As Mess Deck Master at Arms, a temporary assignment aboard ship,  the ability to encourage the crew, curry favor, or even to mentor and train some junior sailor were all part of my experience.     There is nothing that someone with sea duty, can really describe to a civilian about life at sea – noise,   drinking water with a little trace jet fuel (JP5) in the lines, the drills, the boredom, and port visits that another military member doesn’t instantly know what you are talking about. 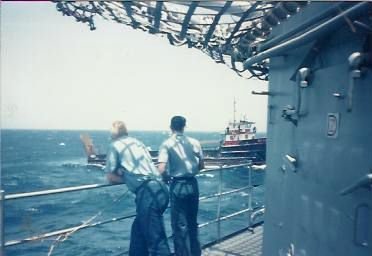