I think Walt Disney had something to do with my life choices.  My earliest Disneyland visit was more than 50 years ago.  My latest was yesterday, and nearly 18 years since I last visited.   Long ago,  I enjoying the rafting rides, the submarine adventure,  exploring the future and the past.  As I grew older,  I studied more about the science behind the animated figures and attractions.  I found myself yesterday in awe, and then wondering about the maintenance and the mechanics of these animated attractions.

As a kid, I was fascinated by the steamboat in Frontierland; perhaps that is why in school when we read Mark Twain, I had something to relate it to.  (There were no paddle wheel steamers I saw where I grew up).  Frontierland and steamboats still hold some interest, but there is so much more enjoyment when you go with someone with little kids.

Before Star Wars, kids my age grew up with NASA , and sci-fi television like Lost In Space, the cartoon Jetsons, and Voyage to the Bottom of the Sea.  In the 1960s and early 1970s, there was a very cool view of approaching new Millennium. Once we all got here,  it had been somewhat close but also  “quaint” sci-fi.  Now Tomorrowland has a very 3D action/  Star Wars feel.

Of course, every Sailor has a little pirate in them so Pirates of The Caribbean was a must-do.  Now though it has a very  Cap’n Jack Sparrow/ POTC  movie tie-in.  But it was the original inspiration for multi-billion dollar franchise for Disney, so I guess it had to be somewhat updated.

But perhaps, I need to do a little plundering before I go off adventuring again.    We bought the year Pass for both parks when I last visited.   I think my stash of gold, rubies, and the lot was traded away for 12 monthly payments.

Now that is piracy, but if Capt’n Jack Sparrow trades you a year’s worth of Yellow Submarines, Mater Tow-rides (California Adventure), and a pirate adventure it is fine.  And while walking seven or eight miles just inside the parks, as well as places for grog, chow, fireworks, and music spectacles, I have entertainment AND exercise.   Maybe if the sea dog’s wife continues to prod me,  I  can resist the impulse to buy a little Mickey swag.  Resist at least until grandchildren accompany us. 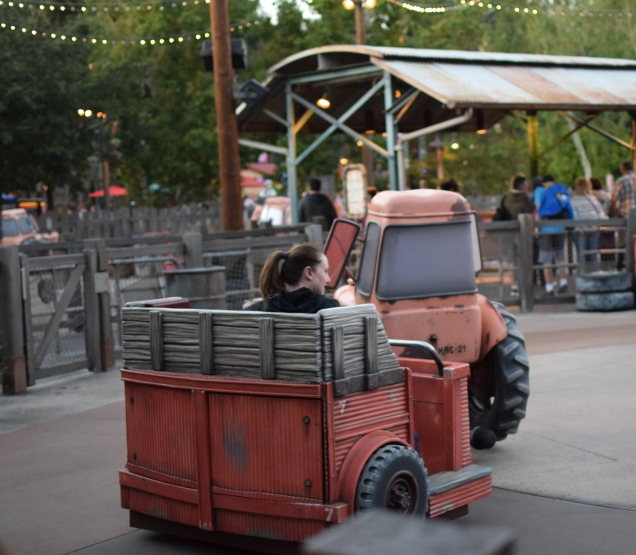 One thought on “does a yellow submarine count as sea-time?”