While I admit to watching only parts of the movie, Life of Pi, is a survival adventure novel of a young Indian man lost at sea sharing a lifeboat with a tiger.  Can you think of a better anti-piracy agent?   Yet, perhaps land animals at sea is not entirely an uncommon phenomenon? 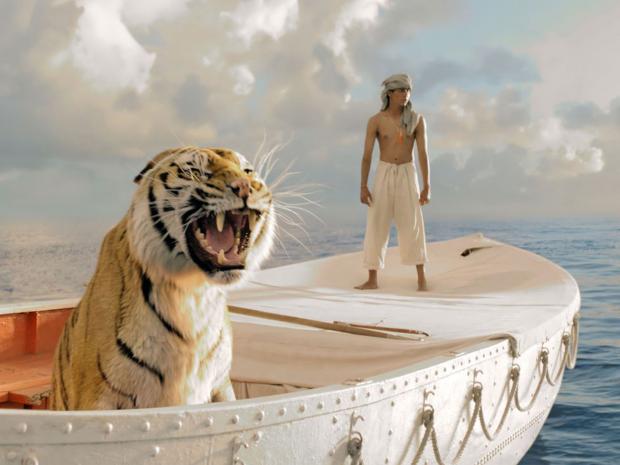 As reported by several news sources *,  the Sri Lankan Navy a couple days ago rescued an elephant at sea — in a great demonstration of compassion.  Leave no elephant behind!   This elephant was crossing a shallow channel and was swept out to sea where it eventually was rescued — nine or ten miles out in the ocean!

This brought up my memory as a pre-teen, walking along the beach at Cape Cod with my mother.   I crossed what appeared to be a shallow channel  – the tide was going out and the beach sandbars made for a great walk.  However,  as the water got above my knees, the sand washed out below my feet and I was swept out into the Bay.    Fortunately, I was never one to panic, and a boater – this was about a half-mile from shore- picked me up and returned me to my desperate mother.  So a pachyderm snorkeling at sea might be an odd sight,  but the Navy responds to all sorts of emergencies.

I know that militaries around the world have trained dogs assigned in K-9 units. If dogs put to sea, it might only be aboard ship.   In an article ** I read today,  describes animals employed in WWII where bats were trained by the U.S. military to deploy incendiary bombs ( and return to their point of deployment for the next sortie).  Apparently, the war ended before the bats were deployed in the field.  I wonder what sort of hazardous duty pay or war pension a bat or its handler might have received.  (Not to mention the sort of war story-swapping at the local VFW or Legion Hall might have been!)   In the same article, the U.S. military,  seems to have employed pigeons trained as optically-guided, missile in-flight targeting and correction system operators.  Twice.  Before and after WWII, until electronics became more developed.   I wonder if any Congressman on the House Armed Services Committee ever questioned THAT line item in a Budget request?

But as far as SEA mammals are concerned, these are employed by militaries with a naval presence.   Here in San Diego, we have dolphins trained for several tasks such as locating and tagging mines for disposal unit removal,  detecting enemy divers,  and other duties.   Sea lions have been trained to find and tag ordnance, equipment and other tasks with their natural abilities.