One of the best and worst times of my young Navy Sailor life was performing as a “Mess Crank”.

While I have heard that the services now seem to employ civilians in the galleys or chow halls  – all recruits learned kitchen duties  in the recruit training commands’ cafeterias when I went through forty years ago.    I can only imagine what shipboard life is now  but it was a fact of sharing in responsibilities especially with the non-rated junior Sailors to help in all the Mess (kitchen) duties.    You might find a “Mess crank”  ( not a pejorative but a traditional term that none in my day might offer they were offended by)  at all hours scrubbing, putting away dishware, or running a buffer across the waxed decks.  For those assigned to the Officers Mess,  Commanding Officer’s or the Chiefs’ Mess,  duties came with varying levels of perks.  Basic duties included setting up the coffee urn. On military installations, the 24-hour nature of the job meant coffee should always be fresh and never run out.  This may have changed somewhat with the Millenials entering the ranks.  About the time I retired, many Sailors were drinking those Energy drinks – all highly caffeinated – so some may have not taken up the coffee habit.

I might be old-fashioned, but woe to a Chief in the “Goat Locker” who disdains coffee! 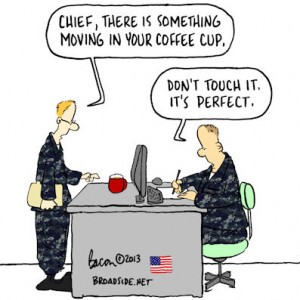 A Chief and his coffee cup are fundamental to Navy lore.   Just as my predecessors, I was unable to function without my coffee cup.   Though some mugs might be now metal or some thermal metal/ plastic amalgam, the traditional one, a sturdy ceramic, that might be emblazoned with the Command logo,  a CPO anchor, or the rating and warfare designation.   Sometimes the outside of the cup was quite worn as might be any treasured possession through many years of service.

A retired Chief Petty Officer,  despite the passage of years, can still be identified by his or her crooked finger,  use of one favorite mug,  or the ongoing need to balance work with coffee – and usually a bit of advice that begins. “now this is a no-sh*t*er..”   On duty, the Navy Chief might otherwise be off-balance were it not for that crooked finger cradling a steaming mug.  It is a tool for supervision, training or correction.   The tell-tale hallmark of a “salty” Chief Petty Officer is the dark, some might say even crust-like, layer of black-brown coffee rings within a Chief’s coffee mug.   “Added flavor” we all say.

And under NO circumstances, be the one “Mess crank”, who takes it upon himself to wash out the “filthy” mugs in the Chief’s Mess.    The Chief’s Community has better information sharing than the latest satellite technology, and while you may eventually rise to become an initiate into the CPO community, someone might have been waiting 10 or 15 years to live down that sacrilege.   These days I keep one cup at work that never, ever gets washed.  Perhaps it is part of my charm.   I have been known to several for years by,  and still earn the respect of  co-workers, as the “Chief”

One thought on “NEVER clean a Chief’s coffee mug”