In naval terminology, and in many other workplaces, the twenty-four hour clock is used.  The first hours of the new day are called “zero”  as in “zero-thirty” or 1230 AM,  or “zero -three hundred” for 3 AM.  Sailors have a particular term for the mid-watch, between midnight and 4 AM,  the “balls to four” watch.

Personally, I prefer the ‘balls to four’ than the ‘zero-four to eight’ watch.  Because I was often working till late into the night aboard ship,  and then getting a little rest, only to be wakened at 0315 to relieve the off-going watch by 0345.   And as you get older you appreciate sleep more – I stood most of these watches in my early Thirties.  I was just into that deep, wonderful place, seeming moments before someone roused me for my watch.

This morning,  Tuesday, is one of those mornings!  For the briefest of moments around 3 AM,  I was in my sweet spot.  And then my wife, who is boarding a flight today at “zero six” to visit the grandchild (and his parents) stirred me.  For the briefest “Inception” (the movie) -like moments,  I was in my rack with some Sailor shining his flashlight telling me it was time to relieve the watch.  ARRRGH!

My wife is mostly a light-sleeper.  I am one not by choice nor biology.    I was on standby to drive her to the airport should our son (the one who does not work the nursing Third Shift) fail to arrive at “oh-dark-thirty” to pick Mom up for the airport drop-off.

Well,  the son did make it.  Mom’s got her mother and son time this morning. I’ve had two cups of coffee and been blogging for an hour.   What the hell?   It is going to be okay.   I will get at least seven nights of solid sleep before I pick her up coming back. 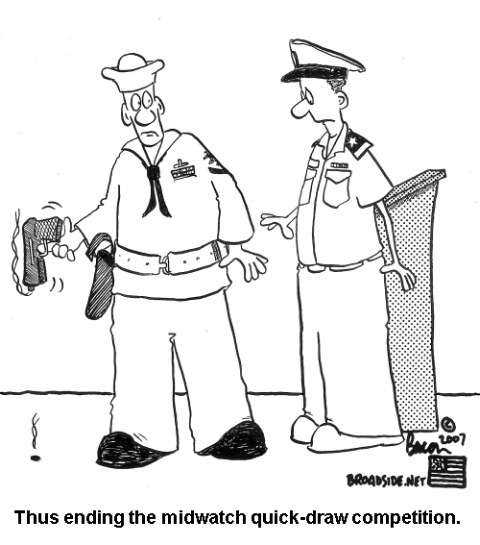