Looking at old mementos this evening,  of my days in the Navy makes me feel, well “Well-seasoned”.  As I look back,  the ships where I was a crewmember are all now dismantled,  and sunk to the depths of the ocean.

The USS TEXAS, a nuclear -powered missile cruiser was several firsts for me: first year at sea; designation as an Enlisted Surface Warfare Specialist (in 1991);  and Shellback.   I did enjoy living near Seattle for nearly a year – the ship was in drydock – before I was transferred at its decommissioning.  It was decommissioned,  dismantled and scrapped at the Puget Sound Naval Shipyard in the late 1990s.

I first fell in love with Canada – Esquimalt,  B.C,  and Vancouver aboard the TEXAS.  I visited, Ecuador,  Panama and cruised through the Panama Canal on that ship.

The  USS PETERSON, a Spruance-class Guided Missile Destroyer,  where I made friendships still strong twenty five years later, was decommissioned and sunk in the Atlantic.  But that’s the ship where I got the opportunity to visit Europe – Spain, France, Italy, Greece,  and Turkey, Bulgaria, Israel, Egypt, and island nations of Crete and Cyprus.  On the USS PETERSON,  I visited Panama and Ecuador a second time – was based out of the East Coast. (That has to be a first two-coast, two ship and back-to-back visits for any Sailor since that time!)    On another PETERSON deployment, we visited Nova Scotia.   Halifax has a friendliness towards seafarers of all sorts.

And from San Diego, the USS CORONADO, a special projects testbed, and command ship for the U.S. THIRD FLEET, took me to Japan, Korea and Alaska ( and Honolulu a number of times)  was decommissioned and sunk in the western Pacific.

Equipment I used to maintain I found in a museum a decade ago.   Uniforms I wore when I first enlisted and then subsequently through 3 uniform changes have been sent to resale and thrift stores.  Occasionally,  I see a homeless person with one of the old pattern utilities and foul weather gear.

Memories are now appearing regularly on EBAY and other second-hand online stores.  But I have a few things that are still worth keeping. 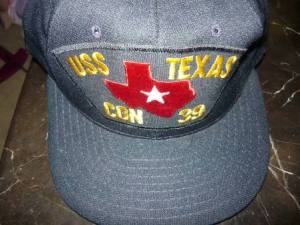 One of the last USS TEXAS calendars, postcards issued by the USS PETERSON, and pictures and challenge coins given to me by CINCPACFLT for earning Sailor of the Year for THIRD FLEET in 1998.  And my retirement shadow box lists installations that have either disappeared or been revamped, remodeled, and redesignated.

So in some future yard sale, should you, dear reader, happen upon a bunch of trinkets from an old Sailor’s box of mementos, enjoy them.  We can now Pinterest and Twitter and Facebook around the whole world.  But, trinkets, salt air and ocean waves are still analog.