“…is another man’s treasures” – see etymology 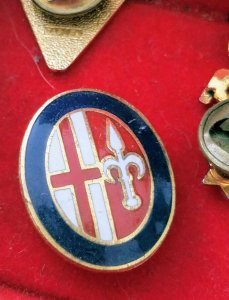 Looking over all the random stuff I have collected in my travels years ago in the Navy, I am recalling how much I learned about marketing since those days. For the longest time, I was quite the buyer. Fresh out of bootcamp, I was “accosted” by a photography film and developing service. I think they were out of business before the contract expired.

“you are going to see the world, kid. You need something to take pictures and to develop them. Sign right here…”

It took a while to learn to bargain proficiently – which is how most of the world operates between vendors and customers. I love hunting for bargains today. I am always asking for any discounts, and chatting with anyone and everyone. But many, even today, will not admit they may subscribe to the old saying, “a fool and his money are soon parted”.

Thinking back to my childhood, two of my favorite characters from television or movies who were amazing at marketing (trading goods), was Pat Buttram’s Mr. Haney in the 1960s television comedy, Green Acres, and Don Rickles character, Crapgame, from the movie, Kelly’s Heroes.

Whether knowing the “talk” of a salesman with just about anything you wanted – or didn’t want, and helping me to avoid “being sold” to a guy who could trade up to get what he needed, I know that my experiences in the Navy were invaluable in my later years. If it was a more-comfortable chair for my boss in the Pentagon, I could get one through “appropriation”. Or if some repair work was needed sooner than the bureaucracy allowed, I could barter favors for moving the work order to the top of the “day’s worklist” stack.

But in the early years, particularly when traveling around the world, I was a tenderfoot with a pocketful of cash, so there were life lessons to learn in salesmanship and becoming a prudent shopper. How many of us, Sailor, Soldier, Airman, Marine, or merchantman have walked past a street hawker without looking or at least listening, to the pitch for gold, jewelry, or girlfriend – swag?

“My friend, my friend, I give you good deal!”

There was always a little marketing going on, from trading shipboard things like embroidered military unit patches, engraved Zippo lighters, military ballcaps. Before widely marketed, Levi’s jeans, Nike shoes, and other “Americana” might make good currency. Sometimes, barter involved Marlboro cigarettes, American whiskey, or music CDs. Yes, kids, there was a whole economy going on, before Paypal. Before Amazon. Before the Internet. A long time ago.

I recently found and then misplaced a picture of me and my shipmates sitting in a beachfront cabana somewhere in South America, decked out in Panama hats. Must have been Ecuador. We had encountered a pretty streetwise kid- a New York City kid visiting his uncle there – who was helping Sailors with the local menu and beer prices. I think he made a kickback but we weren’t complaining. Does any American twenty-something really understand the foreign currency conversion to the dollar? After blowing through your money on the first visit, wisdom then seems to show.

And then there are unique buying opportunities. Ecuadorian vendors in Manta presented me with “genuine” Inca figurines. They were clearly cheap copies but the women selling them from a blanket made me feel I had to buy something. At a beach cabana a kid sold me (yes, I bought one) a fishnet hammock.

In Toulon, France, others offered ladies handbags far more reasonable than the Cannes Louis Vuitton storefront (of course cheaper meant a knockoff). I told my shipmate he could have saved $400 and his spouse wouldn’t have known the difference. Yet he bought the real thing. There were replica French (a nicer word than counterfeit) perfumes in Egypt. One sailor was buying these and fancy stopper bottles from other vendors, to resell at home.

Elsewhere there were Turkish carpets, former-Soviet Army medallions and belt buckles, and amber jewelry (in Bulgaria). Leather goods and inlaid gold and metal items in Spain. Jewelry using ancient Greek and Roman coins in Greece. Tailored suits in Sicily. How many visiting sailors bought panini sandwiches from buxom women in waterfront kiosks in Toulon, France? (These women were Italians!). Anyone visiting Toulon at the time knew “smash” sandwiches.

With the Internet, I imagine these same vendors now have Point-Of-Sale shops, Apple Pay, PayPal and international shipping. Perhaps I too, shall open a little shop. “I give you good deal!”